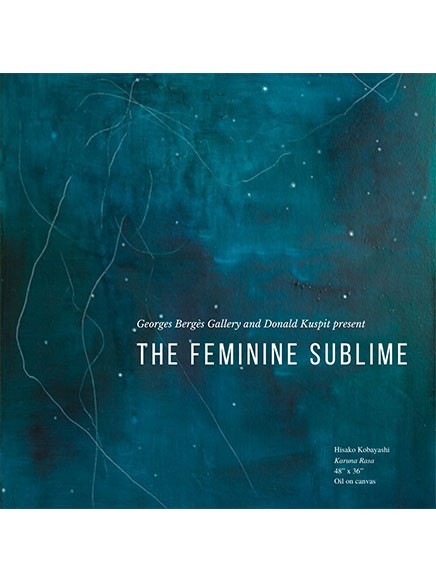 Participate In The Exhibition

The Feminine Sublime explores nature’s awesome and infinite capabilities.  Nature sometimes appears in the form of atmospheric foam, as in Jill Krutick’s The Giving Tree 5. Atother times nature is a violent meltdown, as in her Ice Cube Black and Red, and sometimes is the cosmic ocean, turbulent and restless, as seen in the exaggerated gestures and explosiveness of Carol Ross’ paintings.

In The Feminine Sublime, each artist renders her own methods and techniques, and yet they all succeed in mastering, surpassing, and overwhelming the senses with oceanic depth and mystery:

Hisako Kobayashi's paintings are often at odds with the given of natural appearances. Her work subtlely, and sometimes overtly, show nature’s adaptive capacity to camouflage: one can detect stormy-currents under a perfect state of serenity and stillness, danger is what seems soothing, deception in peace, and force and strength in placidity.  These contrasts and dualities are similarly found in the fiery reds and cool blues of Sonia Stark’s works. Stark’s black whirlpool captures the essence of female creation, an oceanic abyss of possibility.  Opposing blues and reds converge, dissolve, and unite in blackness.  Stark’s blackness is not a foil for red and blue, but a dynamic source, suggesting interchangeability and the confounding of beginning and end.

Alex Choweniec shows us magic by way of the human brain: its tissue, eccentrically shaped to convey the brain’s abstraction and vividly colored to represent its vitality.  Choweniec’s scientific titles—Brain (Acanthocereus tetragonus) and Brain (Euphorbia lacteal Cristata)—belie aesthetic presentations.  In The Feminine Sublime, the brain is self-contained but yet open and responsive to the world beyond.

Donald Kuspit is a highly celebrated American psychoanalytic art critic, poet, and historian. His major writings include Clement Greenberg: Art Critic (1979), The Cult of the Avant-Garde Artist (1993), Health and Happiness in Twentieth Century Avant-Garde Art (1996), Redeeming Art: Critical Reveries (2000), and The End of Art (2004). Kuspit is a professor of art history and philosophy at the State University of New York at Stony Brook.