The Estate of Rasim Babayev

Rasim Babayev (Azerbaijani, b.1927-2007) was an iconic figure in the context of post-Soviet art and a pioneer in the Azerbaijani Avant-Garde movement. Although predominantly focusing on painting, Babayev expressed his vision in different media as sculptor, on monumental murals and mosaic panels, on painted ceramics, as well as working with papier-mâché. Using the language of metaphor to create symbolism – reality knotted with fiction – Div or Daeva (a false God in Ancient Persia) was born to be his muse, for which a large portion of his works depict. As a fictional creature from folklore, he considered it to be a personification of human nature.

As a student at the prestigious V.I. Surikov Moscow State Art Institute, throughout the turbulent years after World War II, Babayev was refused his diploma. The professors accused the pupil of formalism, suggesting that the characters in his thesis: Fishermen of the Caspian Sea, didn’t resemble Soviet art, and instead reminded them of Western influence. This critique was openly rejected by the young student, which then led him to become a catalyst in the non-conformist and expressionist post-Soviet artistic movement. 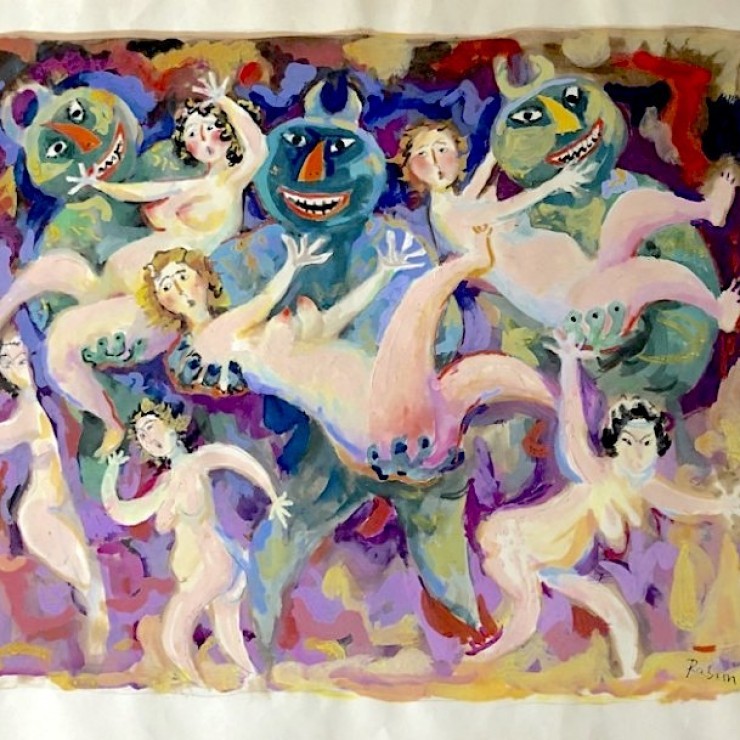 Esteemed art critic, Veil-Matti Hentonnen, put it forth exceptionally: "The work of this painter exists apart from politics. He creates in an untraditional manner. His colors are unexpected and shocking. The artist does not belong to the Russian Soviet School of realism. Rasim Babayev's paintings represent a mixture of the modern art of avant-garde and oriental color. The work of this artist is deeply rooted in the Azeri mythology, in the wonderful and original world of folk fables, stories and legends."

Babayev’s works are represented in private and public collections around the world including the Tretyakov Gallery of Art, The State Russian Museum, The State Museum of Oriental Art, Zimmerli Art Museum, and the Modern Art Museum in Baku.

The artist lives on through his collectors and his estate, managed by his family.

"Rasim Babayev – The Picasso of the Caucasus"